What Is Chalara Ash Dieback?

WHAT IS CHALARA ASH DIEBACK? 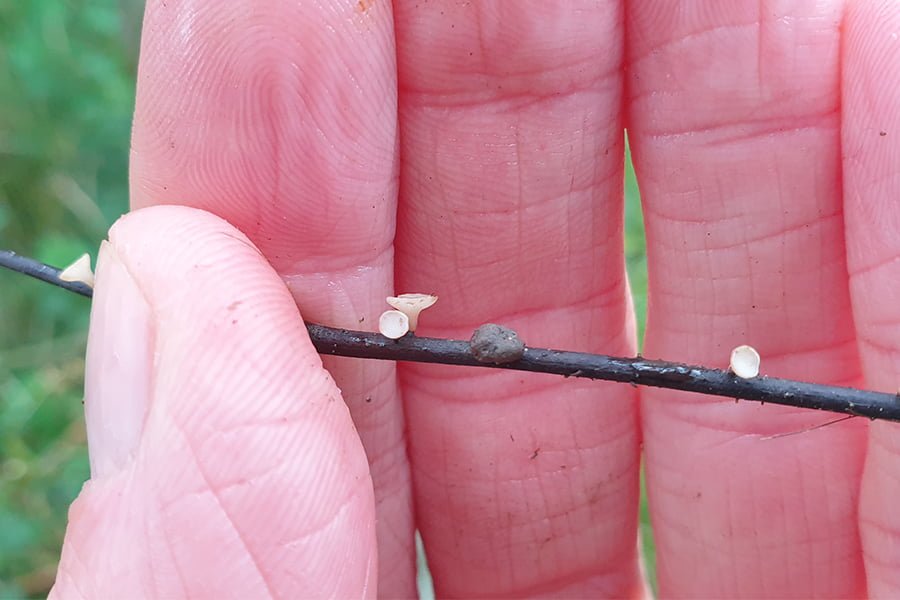 Common ash, Fraxinus excelsior, is a large native tree making up 12% of British woodland. Over 9,000 trees classified as ancient, veteran or notable in the Ancient Tree Inventory are common ash. Some might say that makes the ash a staple British tree as well as an important representative of our environmental heritage. In other words, a tree worthy of saving, but why does it need saving?

Since it was formally identified in 2012, Chalara Ash Dieback has been wreaking havoc on our native ash trees, causing dieback and death with a terribly high mortality rate of up to 85%. The disease is caused by the fungal pathogen Hymenoscyphus fraxineus, formerly named Chalara fraxinea. The disease comes from small white mushrooms that develop on shed leaf stalks in autumn and then spreads via windborne spores.

The disease has a severe detrimental effect on the tree, caused by the fungal mycelia preventing translocation of water and sugars between the tree’s crown and roots. The initial symptoms of this are dead tips, which can be difficult to observe in mature trees. Leaves begin to turn black in autumn rather than brown, and the leaf stalks remain on the tree as the leaflets are shed. Diamond-shaped lesions develop and can girdle twigs and branches, resulting in the canopy thinning and a progressive decline of the whole tree. What’s more, lesions may develop at the base of the stem increasing the risk of catastrophic failure and, worryingly, these can develop with the tree displaying few other signs of the disease. Younger trees seem most susceptible and can succumb more quickly. The disease develops more slowly in mature trees; unless they develop secondary pathogens, such as honey fungus (Armillaria mellea).

The progression of the disease varies quite markedly but is often quicker than most other common pathogens of ash. It is presently unclear what determines this rate of progression, but factors may include weather, location in respect to others trees, and genetics.

Devastatingly, we have seen sites where otherwise healthy trees have developed over 75% canopy dieback over just one growing season. There is a ray of hope in that some ash do show resistance to the pathogen. It is important to retain these ash where safe to do so.

Everyone that is responsible for trees, whether that is through ownership or management, has a Duty of Care to those that may be affected, especially if their tree stock includes ash. If it does, then management should be updated to include the additional risks posed by Ash Dieback.

The most affected by this are larger landowners such as Estates and Councils, who need to be proactive in their approach to assessing and managing their ash. The National Trust report that they will have to fell 40,000 trees over a year costing them £2 million, a heavy expense illustrating the duty faced by organisations, to plan for the effects that Chalara Ash Dieback will have on them over the next 10-20 years and to account for the increased costs required to abate the threat. Some councils have already implemented Ash Dieback Action Plans, such as Kent County Council. The Council is responsible for some 20,000 ash on their land and maintained highway land, and has reported increased costs of ash safety works from almost £6000 in 2014/15 to £66,000 in 2018/19.

However many organisations currently have no planning in place to quantify the problem they may face or to secure the resources they may need to address the risks presented. The figures mentioned previously are hard to ignore, so in order to protect our tree populations, those in the green sector need to present a united front in combatting Ash Dieback.

In many cases, removing badly affected ash will require a felling licence, although trees that present an immediate danger are exempt. Felling licences will generally require the restocking of trees through replanting or regeneration in the felled areas. Unfortunately, replanting with ash is not possible at the moment, as the importation of ash and ash seeds is banned. However, it may be possible to promote natural regeneration of local ash that may be showing better tolerance to Ash Dieback.

TEP has provided the following services to help assess and manage Ash Dieback:

The best time of year to undertake surveys for Ash Dieback is late summer and early autumn. Action Plans can be drawn up at any time, but winter is ideal as they will likely feed into field surveys to assess the baseline Ash Dieback data.

TEP has already been involved in various Ash Dieback projects from basic tree surveys to a comprehensive Ash Dieback Action Plan for a National landowner. If you have any queries on Ash Dieback and how TEP may assist you, then please email alistairmcgregor@tep.uk.com.

I will be back soon

Hey there 👋
Thanks for checking out our website. How can I help you?
Start Chat with: